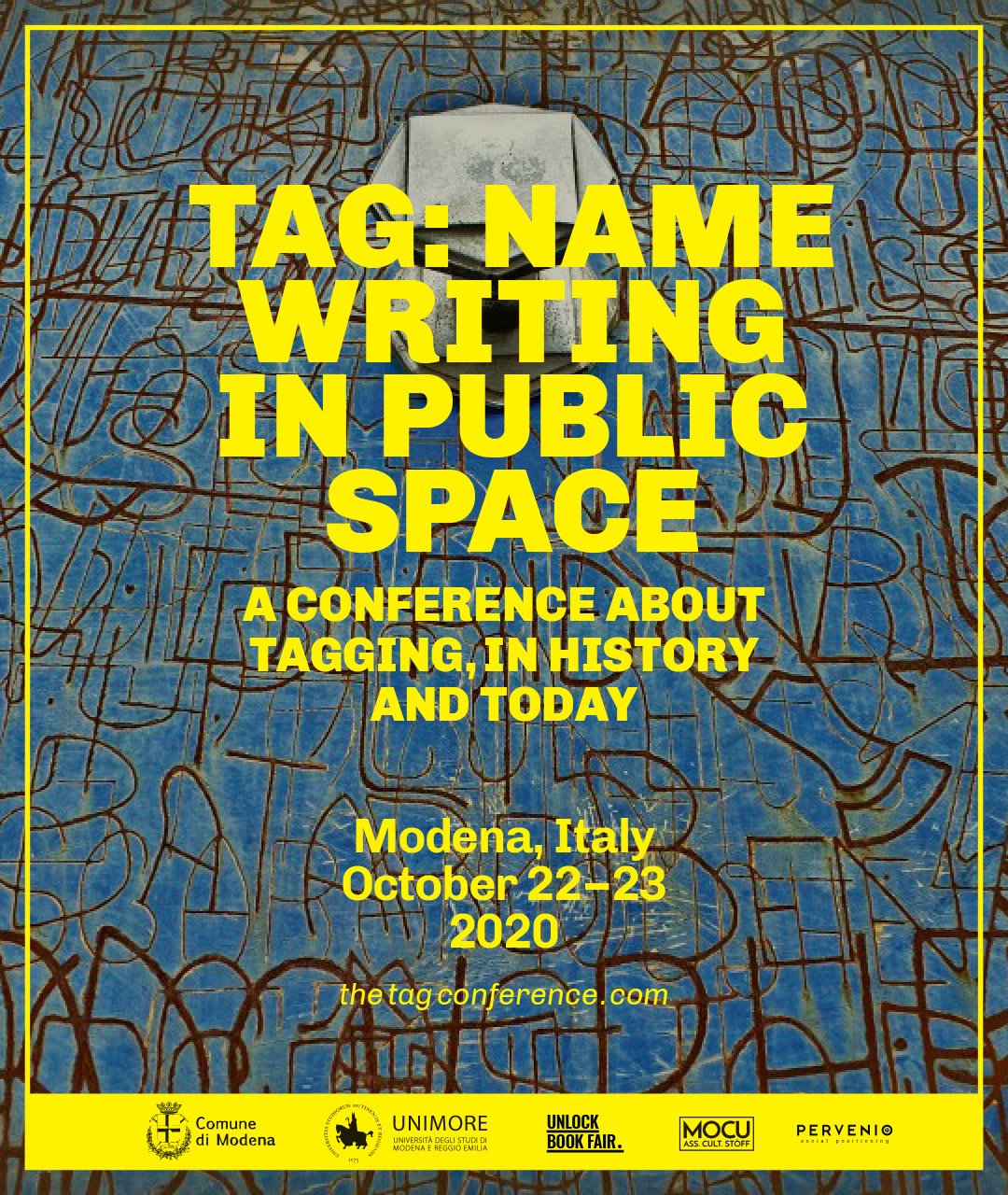 Dear friends of the Tag Conference.

Due to the foreseeable international travel restrictions for this fall, we have been forced to cancel the upcoming Tag Conference, scheduled to take place in Modena in October 22 & 23, 2020.

This news is particularly disappointing for us, as this year’s program was scheduled to be the most exciting so far. It featured great submissions to the call for papers, and a dream line-up of keynotes including Susan Phillips (US), Dumar NovYork (US), and Lachlan MacDowal (AU).

We send a sincere thank-you to Pietro Rivasi and the rest of the Italian team of the Tag Conference 2020, and to the Municipality of Modena, for their continuous support.

Our sister event, the Unlock Book Fair, will take place in Modena on its scheduled dates of October 24 & 25, 2020. It will have a focus on Italian publishers, although it is open to those international publishers able to travel to Italy.

yours,
the Tag Conference team

A conference about tagging,
in history and today

The Tag Conference is an international meeting where academics and non-academics talk about both contemporary tagging and its historical antecedents.

In its three successful annual instalments so far (in Berlin, Amsterdam and Cologne), Tag has showed there is a substantial interest in this underexplored field among thinkers across the world. This is why we are happy to announce the fourth Tag Conference, a new opportunity to delve deeper into the study of name writing in public space.

This edition of the Tag Conference is hosted by the Università di Modena e Reggio Emilia.

All lectures are free and open to the public.

On the weekend directly after the conference, and also in Modena, the same team behind Tag welcomes you to the Unlock Book Fair, the annual meeting of the international graffiti and street art publishing scene.

For a PDF version of this call for papers click here (1,7 MB)

Informal name writing in public spaces is a time-honoured practice, probably as old as writing itself. From children and anonymous labourers to prominent authors, politicians or archaeologists, people of all kinds and eras have felt the urge to symbolise their existence in a particular place and time by leaving a personal trace for other people to see.

This practice has played a particularly visible role in different points in history, such as Ancient Rome and Romantic Europe. It has served as a cartographic tool and as a way to keep track of people in unexplored landscapes. It has been used as a symbolic weapon in wars. And, in the last century, it acquired unprecedented intensity and became the central feature of several full-fledged folk cultures throughout the globe.

The most sophisticated of these cultures is the graffiti tradition that developed in the subways of New York City during the 1970’s and has later become a part of the landscape of most cities worldwide. By influence of this tradition, name writing is today generally referred to with the slang term “tagging”.

The Tag Conference aims to foster the discussion about tagging of all eras, about its nature, its meaning and its history, and about the diverse tagging traditions and cultures that exist and have existed. The conference is open to anthropologists, art historians, archaeologists, philosophers, geographers, urbanists, calligraphers, artists and other intellectuals or aficionados with an interest in the field.

The Tag Conference welcomes presentations about a range of topics including, but not limited to, the following:

Tagging as a calligraphic practice: The tools, materials, surfaces, methodologies and graphic references of different tagging cultures. How these elements give shape to each culture’s calligraphic styles. The design and building of customised and DIY writing tools and materials as ways to solve calligraphic problems related to surface, reach and permanence.

Tagging as a spatial and time-based practice: The series of tags as a network spread through space and time. The relation of tagging and architecture. Tagging as a way for the individual to relate to the built environment. Tagging as a tool for control of the territory for street gangs.

Tagging as cartographic tool and as a way to keep track of people across large expanses of territory: Daniel Boone and the tagging of North American pioneers. El Morro, Signature Rock and other traditional tagging sites in the North American colonial routes. Shepherds, early hobos, hitchhikers. Other related cases.

Tagging as symbolic weapon in wars: Notorious cases such as the tomb of Tutankhamun or the Reichstag in Berlin. The case of “Kilroy was here”. Other related cases.

Tagging as a marking of a fleeting relation to a place (“I was here”): tagging on mountaintops, caves or catacombs, on trees and rocks along routes and paths, on touristic spots, and on other symbolically charged places. Tagging on bus stops, surfaces next to queues in public services, in waiting rooms and public toilets, and other mundane places.

Tagging as a marking of a sustained relation to a place: Tagging in military bases and places of stationing. Tagging in prisons. Tagging in the workplace, on school desks and gym lockers.

Tagging as a rite of passage: The tagging tradition of the Spanish quintos. The vítores tradition in Spanish universities in the XX Century and before. Other related traditions.

Tagging in history: Tagging in the Classical era. Renaissance-era tagging on Roman archaeological findings. Tagging as a part of Romantic tourism. Other cases.

Tagging and technology: Research about tagging that uses computing technologies, databases or robotics.

The relation of tagging with other forms of public graphic identity: Tagging as a reflection of advertising and of other forms of official name-writing in public space. Baudrillard’s reading of tagging as semiological warfare. Tagging with images, from street art “bombing” (stencils, stickers, paste-ups) to the paint patches of “graffiti vigilantes”.

The deadline for submission of abstracts is 30 April 2020.

The list of accepted abstracts will be communicated in May 2020.

Participation in the conference is free. The organisation cannot cover travel expenses for presenters. There is a limited number of accommodation grants for applicants lacking institutional support.

The Tag Conference welcomes the participation of non-scholars, and will consider any alternative presentational format such as panel debates, artist discussions, photography or video.

Venue
To be announced